UK house prices are up on average 0.3% in the past month 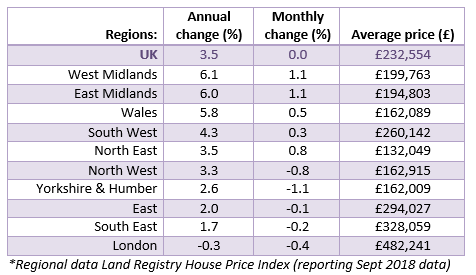 HomeOwners Alliance: “On a national level, all of the major indices report a slowdown in the annual rate of house price growth. The lowest level seen in close to five years. This has been mirrored by a slowdown in transactions in October – down 2.7% year on year.   Demand has stalled which is not surprising given the current climate of political and economic uncertainty. Still, there are pockets of the country where house prices are climbing rapidly – notably the Midlands and Wales.”

RICS: “A sustained softening in demand over recent months has likely driven the weaker price trends in parts of the country.  Affordability pressures, political uncertainty and a lack of fresh stock coming onto the market all continue to hinder activity to varying degrees.”

Halifax:  “The annual rate of house price growth has fallen to 1.5% in October, which is the lowest rate of annual growth since March 2013.  House prices continue to be supported by the fact that the supply of new homes and existing properties available for sale remains low.  Further house price support comes from an already high and improving employment rate and historically low mortgage rates which are creating higher rates of relative affordability.”

Nationwide: “October saw a slowdown in annual house price growth to the lowest level since May 2013.  However, this was broadly in line with our expectations, as the squeeze on household budgets and the uncertain economic outlook is likely to have dampened demand, even though borrowing costs remain low by historic standards.”

Rightmove:  “The annual rate of increase drops to 0.9%, the lowest annual rate since February 2012, which was the start of the price recovery that led to average new seller asking prices rising by over a third in less than seven years.  Stretched buyer affordability and a slowdown in price rises are the natural outcome of property prices increasing over the past seven years at a far faster pace than average wages.”