Most of the major House Price Indices report house prices to be up in the past month: -0.9% Halifax, +0.2% Nationwide, +0.4% LSL, +1.4% Land Registry (the average monthly change across Land Registry, Nationwide, Halifax and LSL is 0.3%).  Rightmove, report a rise of 0.4% in asking prices in January.  Land Registry and LSL data refers to December.  All other indices are reporting January figures. Mortgage approvals for house purchases, a leading indicator of completed house sales, increased for the fourth successive month, up 1% between November and December 2016 to 67,900 — the highest level since March 2016 (Bank of England).

Halifax First Time Buyer review reports first-time buyer numbers up 7% in 2016 — the highest level since the start of the financial crisis in 2007 (still 17% below pre-crisis peak).

HOA:  “Despite ongoing political and economic uncertainty, transaction activity has held strong. House price rises have been modest and it is likely homeowners and prospective buyers will keep a watchful eye as the political and economic situation develops with the triggering of article 50 and subsequent negotiations.”

Nationwide:  “The outlook for the housing market remains clouded, reflecting uncertainty surrounding economic prospects more broadly. On one hand, the economy has remained stronger than expected in the wake of the Brexit vote. However, there are tentative signs that conditions may be about to soften.  Employment growth and wage growth has slowed.”

Halifax:  “UK house prices continue to be supported by an ongoing shortage of property for sale, low levels of house building, and exceptionally low interest rates.  These factors are unlikely to materially change during 2017.”

Rightmove: ““The majority of the market is price sensitive with most agents we surveyed reporting that possible buyers are reluctant to enquire about a property just a few percent too high in price.” 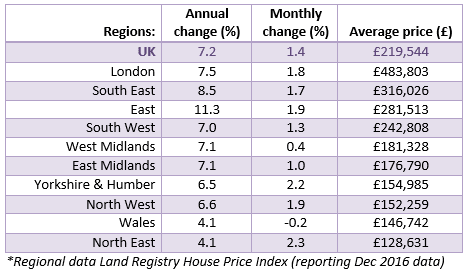