How to get help with your energy bills

As households brace themselves for another staggering rise in energy bills in October the Chancellor has announced a package of help to soften the blow. Here's what’s available to help with your energy bills.

This week Chancellor Rishi Sunak announced a package of help to support households facing the cost of living crisis. These are:

The announcement follows widespread concern about how households were going to pay for energy bills. Earlier in the week, UK energy regulator Ofgem said the typical household energy bill was set to rise by £800 in October, taking it to around an eye-watering £2,800 a year. Energy bills had already risen by £700 on average in April.

How much is the support worth?

The support is worth £15bn according to the Chancellor, who added that around three quarters of the total support will go to vulnerable households. And it will be partly funded through a temporary levy on the profits of oil and gas companies at a rate of 25%, which Sunak also announced.

What help was announced earlier this year?

The move comes after other support that was announced earlier this year. This included a £150 Council Tax rebate announced by Rishi Sunak in February for households in Council Tax bands A – D in England to help with the cost of energy. This does not need to be paid back. The quickest way for someone to have received this was for them to set up a Direct Debit to pay Council Tax. However many households still haven’t received this money, the majority of which don’t pay by Direct Debit.

So if you’re entitled to this help and you haven’t received your money yet contact your council. Devolved administration were due to receive an equivalent amount of funding to cover this. Find your local council’s contact details.  A discretionary fund of £144 million was also announced to support vulnerable people and individuals on low incomes that do not pay Council Tax as well as those in Council Tax Bands E-H with an annual household income of less than £79,000.

Should I switch energy provider now?

If you’re on a standard or default variable tariff, it is probably not advised to switch at the moment. In recent years, it was usually the case that fixed tariffs were the cheapest option for households. But with the increase in the cost of fixed deals in recent months, experts say in most cases households will be better off sticking to the price cap rather than fixing. However, things can change and in some cases a supplier will offer households fixed deals directly. So do keep an eye out for any fixed deals that could be a good option for you – but do the sums to make sure it’s the best deal for you.

How can I spread the costs of my energy bills?

If you’re struggling to pay your energy bills, contact your supplier as soon as you can, says energy watchdog Ofgem. Your supplier is obliged to work with you to agree on a payment plan you can afford. You can ask for:

However if you can’t agree on a way to pay, get help from Citizens Advice or Advice Direct Scotland.

Can I get financial help from my supplier?

But, bear in mind, you’ll need to jump through a lot of administrative hoops for the application process. For example, you’ll need to have spoken to a debt adviser first and completed a budget showing your income and spending. And the eligibility criteria varies. However, those in the greatest need are prioritised.

What energy bills help is available from charities?

According to Ofgem, Charis has information on grants some charities offer and how to go about applying. While Turn2us has a benefits calculator, a grants search tool to help you find out what support you can get and adviser locator tools. You’ll also find information on benefits and information on help with paying energy and water bills.

Are you entitled to more government help?

There are other schemes you may wish to investigate:

Also it might be of interest to know that in this year’s Spring Statement the Chancellor announced VAT would be scrapped for homeowners installing energy efficient measures such as solar panels, heat pumps, or insulation over the next five years.

See our guide for advice on the big energy efficient home improvements to consider, how much they cost and the likely energy savings.

How to get debt advice

If you’re worried about debt then it’s vital to get advice sooner rather than later. You’ll find advice on managing debt problems and budgeting through:

Why have energy prices gone up?

So why have prices gone up? The energy price cap was introduced in 2019. It is designed to limit how much energy suppliers can charge customers on standard or default variable tariffs. The price cap sets a limit on the maximum amount suppliers can charge households on these tariffs for each unit of gas and electricity you use. And it also sets a maximum daily standing charge.

Ofgem currently sets the cap every six months, based on wholesale energy prices and the costs energy companies incur in supplying gas and electricity to customers. In October 2021 the price cap was set at £1,277 for those on default tariffs paying by Direct Debit, this marked an increase of 12% compared to the previous cap. This rise was in reaction to soaring worldwide wholesale costs for energy. In April 2022 it was set at £1,971 for those paying by Direct Debit. However in May 2022 it was announced the price cap would change every three months. Ofgem predicts the price cap in October will be in the region of £2,800. And customers may see bills rise again in January 2023.

Have you accessed any help with your energy bills? Share you experience below How homeowners can beat the cost of living crisis 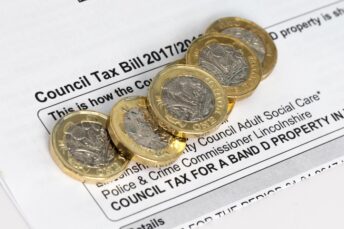 Can I get a discount on my council tax?