UK adults are more concerned about property prices and availability today than at any point in the last five years, our latest Annual Survey reveals, with 2.75 million more people now saying house prices are a serious problem A massive 83% of people believe house prices are a ‘serious’ problem, up from 77% five years ago, according to the Homeowners Survey 2018. Meanwhile 77% of respondents say availability of housing is now a major concern, up from 69% in 2014.

The YouGov survey, polling over 2000 UK adults, is conducted on behalf of HomeOwners Alliance and BLP Insurance and has been trending housing concerns for five years.

In further evidence of the worsening crisis, the survey found the quality of homes is a growing issue with 57% of adults saying it is a serious problem up from 52% in 2014.

The results reveal a worsening picture for those wanting to get a foot on the property ladder. Among aspiring first time buyers, the proportion saying house prices (86%) and saving for a deposit (87%) is a serious problem is up over the past year.

London continues to be a ‘hotbed’ for housing concerns. House prices, availability of housing, quality of housing, being able to move up the ladder, stamp duty rates, the leasehold/ freehold system, the home buying and selling process and gazumping all register higher levels of concern among Londoners.

“The housing sector in the UK is on its knees. There’s a shortage of building, a constant stream of stories surrounding poor quality and unfair deals for homeowners, a lack of social housing, rising homelessness and a leasehold system that is dangerously broken. As our survey shows, these problems have escalated over the last five years and the crisis is deepening. We’ve become desensitised to the headlines.

“People are just as keen as in previous years to own a home but the system is failing them, despite the introduction of flagship schemes like Help to Buy. Although Brits have reacted positively to government’s changes to stamp duty house prices and availability continue to be major concerns year on year. It’s telling that leasehold issues have been by far the fastest growing concern for the last 2 years – the government needs to hurry up with their plans for leasehold reform and be more ambitious.”

“The results of this survey paint a bleak picture for both the UK housing industry and potential homeowners. Concerns around quality of build reflect the serious deficiencies in quality within design and build procurement which are severely impacting confidence in the housing sector. To meet this challenge design codes and reviews should be implemented industry-wide.

“No single initiative will solve the current housing crisis. Steps need to be taken to stimulate SME housebuilders, embrace technologically innovative build methods and encourage new entrants into an industry suffering from a shortage of skilled workers. It is the responsibility of all stakeholders involved, from government to large developers to SME builders, to commit to meaningful change and push the industry forwards in delivering more, better quality and affordable housing options for those wanting to get on the housing ladder.”

The research also found the much-criticised leasehold system is the fastest growing housing issue for the second year running with 56% of UK adults now citing it as a serious concern, up from 50% in 2017. These figures are even higher in London at 69%, up from 53% in 2017.

With additional stamp duty reforms introduced this year to assist first-time buyers, concern with stamp duty has subsided further over the past year (now 38% of UK adults say stamp duty is a serious problem down from 58% in 2014). Regionally, concern about stamp duty rates is higher in East of England (59%) and London (57%) and lower in the North. 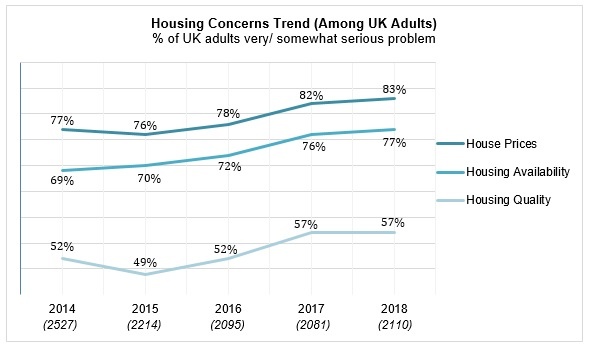 Figure 1: Trend Aspiration to Own (Among Non-Homeowners): 2013-2018 Homeowner Survey 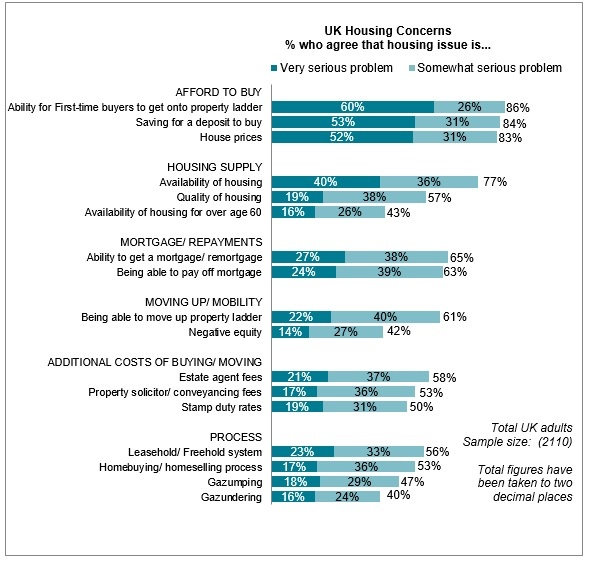 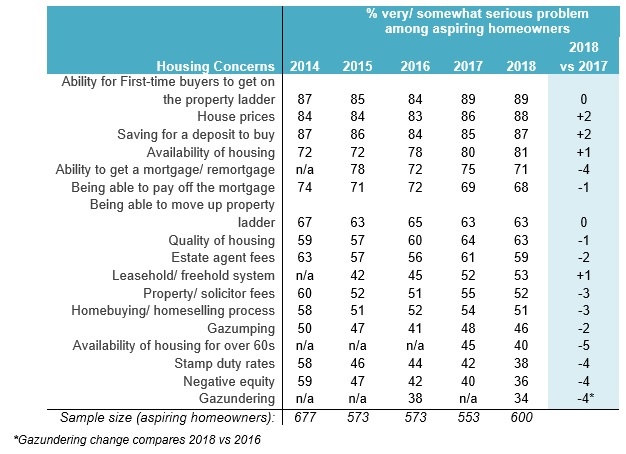