Consumers are leaving themselves at risk of getting a bad deal when choosing an estate agent because they’re not paying attention to facts and figures, research from EstateAgent4Me has revealed.

Consumers are leaving themselves at risk of getting a bad deal when choosing an estate agent because they’re not paying attention to facts and figures, research from EstateAgent4Me has revealed. The research has found that despite sellers claiming fees and performance were the most important factors when choosing an agent, very few actually took the time to access this information properly.

While 96% say fees charged by the estate agent are important, only half of sellers invited two or more agents around to do a valuation and sales pitch, only one in four sellers (26%) negotiated the commission they paid and only one in five (22%) asked to see the agent’s standard terms and conditions before selecting their preferred agent. The HomeOwners Alliance provides members with guidance on their agreements with estate agents and can check your contract for you. To see how we can help, find out more about becoming a member

Meanwhile, despite 91% saying performance of the estate agent – their success rate, ability to achieve asking price and the number of properties on their books – is important, only a third of sellers (32%) checked the agent’s recommended selling price against similar properties on Land Registry/ Rightmove or Zoopla.  Only one if five (19%) sellers looked for feedback or online reviews on the agent they engaged and – shockingly – only 30% of sellers read the fine print on their contract carefully. The survey also revealed that professionalism, appearance and manner matter more to consumers than experience. Professional cues rate as highly important in choosing an estate agent. 93% say answering the phone professionally with prompt follow-up is important and 93% say professional and smart-looking property particulars are important.

Being too pushy or using obvious sales tactics is the number one turn-off (48% say this would be likely to put them off an estate agent) while a lack of professionalism in tone can put off potential buyers and sellers. 39% of consumers say being unfriendly, unenthusiastic or stand-offish would be likely to put them off while 27% thought it could go too far the other way, with an agent being over-familiar. 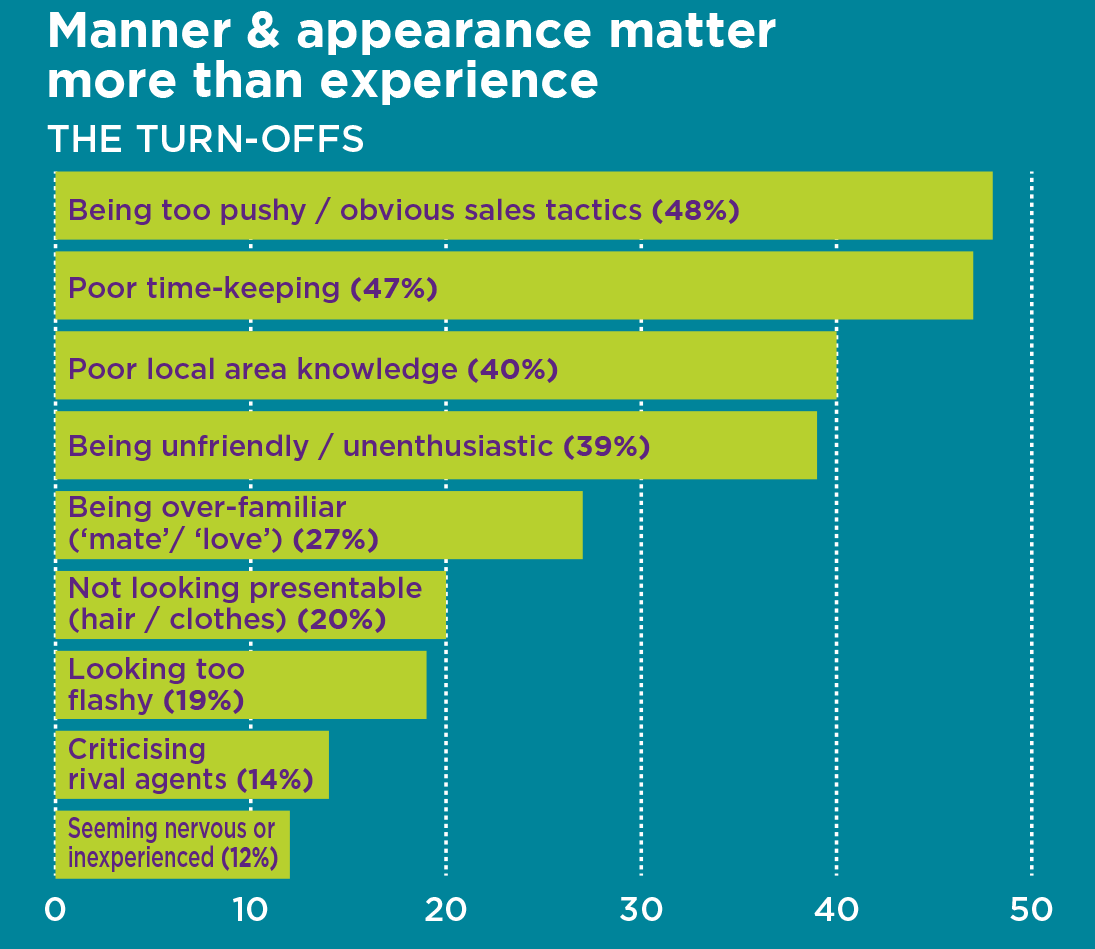 Interestingly, given the rise in popularity on online agents, the vast majority of respondent said personal connection and rapport remains important.

Almost nine in ten (87%) say that rapport with branch staff is important when choosing an estate agent to deal with and more than half of sellers (52%) and 43% of buyers visited the estate agent branch.

“It’s worrying that while consumers seem to be aware of what really matters when it comes to choosing an estate agent, few of them actually base their decisions on this. Not having three agents give you a valuation before appointing one and not reading your contract carefully are basic mistakes that could lead to big problems. While instinct is always important it’s essential that sellers trust the numbers and remember the devil is in the detail.”

“We’re here to help consumers get a better deal. From helping you find the best three estate agents in your local area, based on their performance, to checking your estate agent’s contract for you. We’re on your side”

Methodology: The data in this release is based on research conducted in July/August 2017 and based on 1,114 UK adults that have used an estate agent to either buy or sell a property.