The 3 impacts of stamp duty reform

Since its reform last December we take a look at some of the impacts, predicted and real

According to an analysis by Nationwide of the abolishment of the stamp duty “slab structure”, 98% of buyers will now pay the same or less tax when buying a property.  Only those purchasing homes of more than £937,500 are set to pay more stamp duty.  The greatest impact is likely to be for those buying just above £250,000 who could save £5,000 in tax (or 2% of the purchase price). To find out more about stamp duty following the recent changes check out our guide “How much is stamp duty and when do I pay?”

To find out exactly how much stamp duty you’ll pay, visit our calculator here

2. Some regions benefit more than others…

According to a regional analysis conducted by Nationwide, those in the South of England – where average house prices are higher – will benefit the most from stamp duty changes.  Estimates suggest 85% of transactions in London, the South West and South East will benefit from the changes compared with approximately 50% in the North, North West and Yorkshire and Humberside. 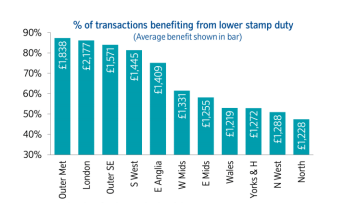 Of the transactions resulting in more stamp duty to be paid, two thirds are in London where there are more high value transactions than in other regions.  Property portal Rightmove notes that there are winners and losers with the Stamp Duty changes in London and that the additional threat of mansion tax on properties over £2 million will remain a deterrent until at least May’s election.

3. An end to house price “bunching” under thresholds

The Stamp Duty reform is also being welcomed as it is expected to alleviate distortions in property prices. LSL Property Service pointed to other benefits of the reform:

“Breaking up the outdated slab system of Stamp Duty should allow activity to build further at the bottom rungs of the ladder.  It should help erode up-front barriers of purchasing a home for the significant majority of buyers and sellers may feel the benefit of weightier demand, as well as being able to price their homes more realistically, without having to tactically negotiate threshold barriers.”