UK home sales of more than 105K are at their highest since 2016. Home sales increased 10% in October (up on September) and are 8% higher than October last year.

Mortgage approvals rose in October to the highest level seen in 13 years. The latest Bank of England figures show the number of mortgages approved to finance house purchases, rose by 6% in October. Year-on-year, the October figure was 51% above October 2019. Source: Bank of England, seasonally-adjusted figures)

What’s happening in your area? 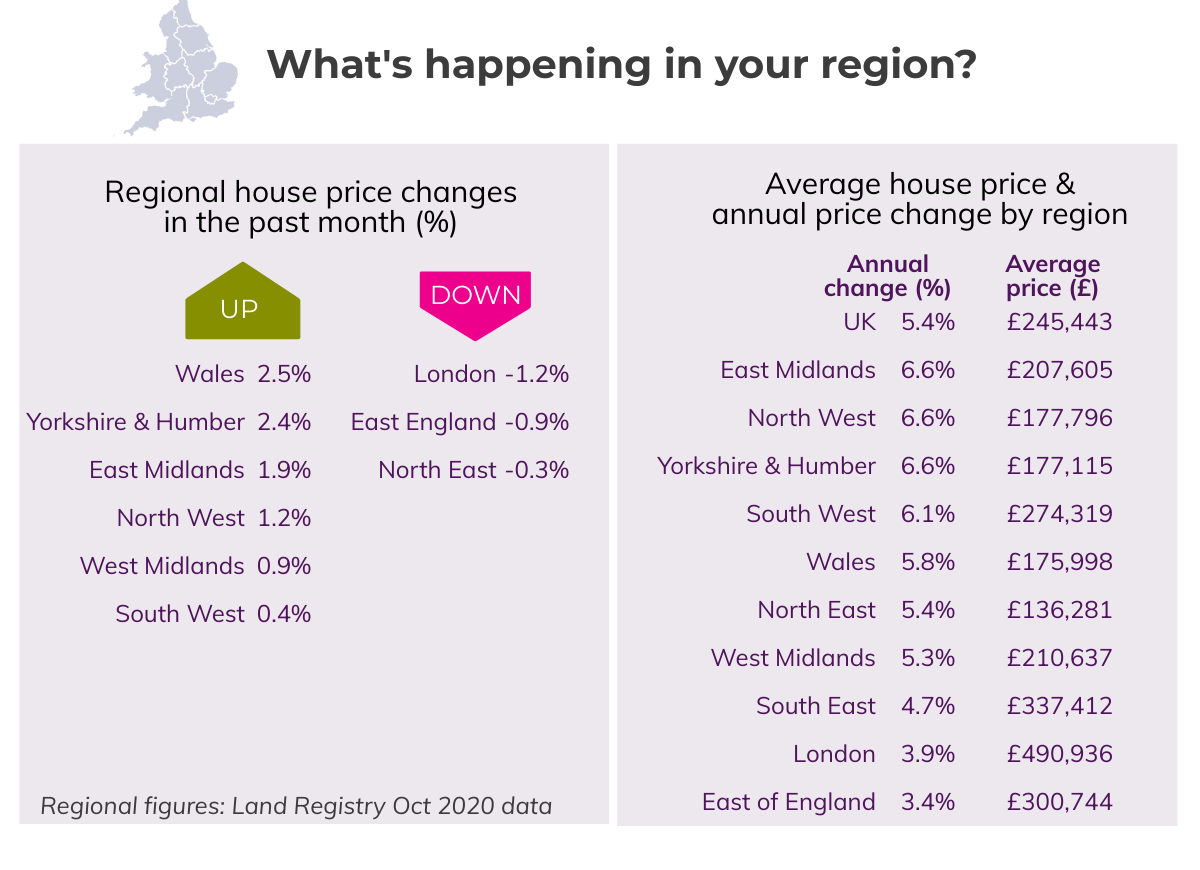 HomeOwners Alliance: “House prices and transactions accelerated this month to the fastest rate in four years with buyer demand unaffected by the national lock-down in November. Mortgage applications are at a 13 year high, indicating activity is likely to continue in the near term. However, with predictions of rising unemployment and uncertainty about the recovery of the wider economy, we are likely to see a dampening effect on activity and house prices over the coming months.”

Halifax: ”With mortgage approvals at a 13-year high, the current market continues to be shaped by a desire for more space, the move from urban to rural locations and indications of a trend for more home working in the future. As the stamp duty holiday deadline approaches, properties sold to home-movers recorded a much higher rate of annual house price inflation than first-time buyers. The stamp duty saving of £2,500 on a home costing £250,000 is now far outweighed by the average increase in property prices since July. The housing market has been more resilient than many predicted at the outset of the pandemic. However, with unemployment predicted to peak around the middle of next year, and the UK’s economy not expected to fully recover for a number of years, a slowdown in housing market activity is likely over the next 12 months.”

Nationwide: “Despite economic headwinds, housing market activity has remained robust. October saw property transactions rise to 105,600, the highest level since 2016, while mortgage approvals for house purchase in the same month were at their highest level since 2007. Behavioural shifts as a result of Covid-19 may provide support for housing market activity, while the stamp duty holiday will continue to provide a near term boost by bringing purchases forward. However, the outlook remains highly uncertain and will depend heavily on how the pandemic and measures to contain it evolve, as well as, the efficacy of policy measures implemented to limit the damage to the wider economy.“

Rightmove:  “Given the ongoing mini-boom, prices might have been expected to rise again this month, but instead we have a slight dip which could be a result of some new sellers pricing more realistically to have a better chance of agreeing a sale in time to benefit from the stamp duty savings on their onward purchase. Sellers are twice as likely to sell if they agree a sale based on the first price at which their property goes on the market, something that’s even more important now as we move towards the end of March and the end of the stamp duty holiday.”

RICS: “The November 2020 RICS UK Residential Survey results remain consistent with a solid trend in sales activity across the market, even if the sharp growth in buyer demand reported over recent months appears to be losing a bit of steam. For the time being, prices continue to be driven sharply higher in most parts of the UK, although near-term expectations for both prices and transactions point to a more moderate picture emerging over the coming months.”