Home improvements are expensive. But add on VAT at 20% and you can see why our HomeOwners Survey reveals homeowners either deterred from doing home improvements at all, or forced to pay cash to afford it In the latest news release from our annual HomeOwners Survey of over 2000 UK adults, polled by YouGov and sponsored by Resi.co.uk, we found Brits are paying cash in hand to get their home repaired or done up.

“But there is a huge risk of not getting a receipt for the work: they have no proof that builder, carpenter or electrician has done the work – and therefore no guarantee that if things go wrong they will come back to put things right.

“For several years the Home Owner’s Alliance has supported the cut the VAT campaign. We need VAT to be slashed to a minimum 5% – otherwise a black economy is being fuelled and government is tacitly green-lighting this.”

Alex Depledge, CEO of Resi.co.uk, says, “Buying a home is the largest purchase most people will make and renovations are often their second largest lifetime spend. And if you’re spending £100,000, which is an extraordinary amount of money to save up – or take out on top of your mortgage – and then have VAT slapped on top of it, it can become impossible.

“But VAT on building work doesn’t just affect consumers. Builders are also affected. For smaller operations, working below the VAT threshold, it can become extremely difficult not to succumb to the temptation to take some aspects of a project off the books.”

Read more about our Cut the VAT campaign here

Black market booming thanks to VAT

Almost one third (31%) of homeowners have paid cash to avoid VAT cost on home maintenance and improvement jobs. That makes 5.3 million homeowners.

Paula Higgins Chief Executive, Homeowners Alliance, says: “Our current system is inadvertently forcing homeowners to be dishonest. Many people have cash to build an extra bedroom for their growing family or to have a downstairs loo put in for their elderly parents. Government needs to have some focus and cut VAT right back to a maximum 5%.

“It’s been demonstrated that this could give at least a £15 billion boost to our economy, creating thousands of jobs. The current short-sighted system means that Government are actually doing themselves out of money.”

Tip of the iceberg

Alex Depledge, CEO of Resi.co.uk, says: “The reality is that this figure – while shocking – is almost certainly just the tip of the iceberg. We all know someone who has paid cash in hand to avoid paying VAT, it happens all the time. But this black market makes homeowners vulnerable. There is no recourse when something goes wrong if you’ve paid cash in hand.

“At Resi we are calling for a simplification of the rules around VAT. Previously we would have called for the rate to be reduced to 5%, in line with EU law. However, if we do end up exiting the EU, VAT on construction work could be suspended completely. This could be a rare silver lining to Brexit, kickstarting the UK’s construction industry just when it needs it most.”

A boost to the economy

Brian Berry, Chief Executive of the Federation of Master Builders (FMB), says: “Reducing VAT on housing repair, maintenance and improvement work could boost the UK economy by more than £15bn over a five year period, according to independent research by Experian. A reduction in VAT could also create more than 95,000 jobs and save 240,000 tonnes of carbon dioxide from thousands of homes.

“This proposal has the backing of more than 60 charities, trade associations, business groups and financial firms as there is no other policy that will help the UK achieve so many of its economic, environmental and social aims with so little cost to the public purse. At a time of continued political uncertainty and a dip in construction output, this is exactly what the UK economy needs.”

Brexit is a factor for 1 in 6 homeowners (15%) in putting off home improvements. The issue is greatest among homeowners in London (20%). 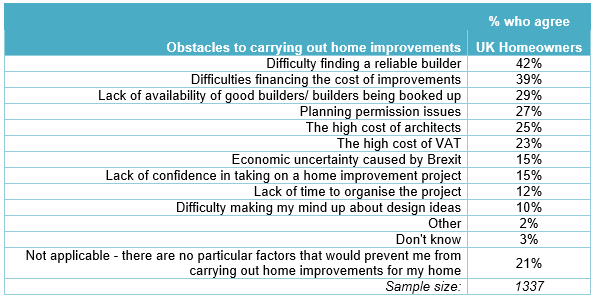