“House builders won’t deliver quality unless we hold back cash”

That's what almost 9 in 10 (88%) of new build homeowners and three-quarters (76%) of UK adults are saying according to our latest study to measure support for the introduction of a ‘snagging retention’ system - where buyers withhold funds to house builders until they rectify any faults.

The figures are from a national survey conducted by the HomeOwners Alliance and BLP Insurance, polled by YouGov, looking at new build homeowner satisfaction throughout the purchase and ownership experience.

Respondents to the survey said that a snagging retention would “Incentivise builders to build right first-time, improving quality standards” and “hold builders to account when problems arise, with builders incentivised to fix problems”

The HomeOwners Alliance are spearheading a campaign calling for Government to clamp down on developers of new build homes who leave buyers with an unacceptable litany of ‘snags’ and defects.

The campaign comes after a report by the New Homes Review that found 91% of new homes had snags and defects and a report by the Home Builders Federation that showed the number of people who say they would not buy from the same builder again doubling in the last year.

It also follows a swathe of complaints about developers who have failed to fix faults with new properties from ineffective insulation to ill-fitted doors and dodgy electrics to poor plumbing. 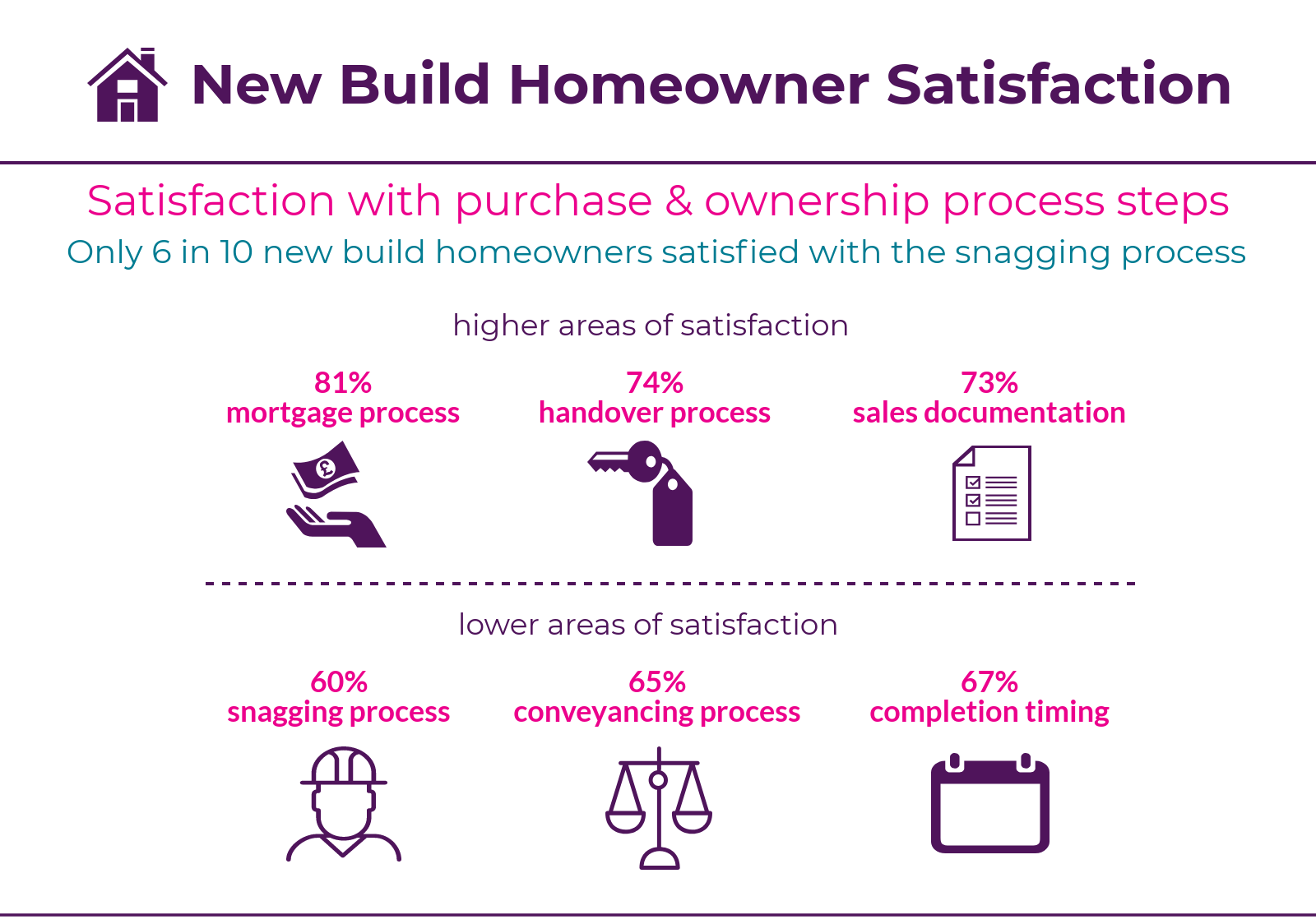 “Housebuilders should take careful note of the 88% of new build homeowners who believe that there should be a snagging retention process otherwise they will alienate their core customers.

“Given the widespread publicity of new homes being handed over with significant snagging errors, house builders need to urgently address their quality assurance processes. If the average consumer can draw up a list of errors and problems with their new home, why do qualified professionals fail to spot them? The purchase price of a new home is one of the biggest financial outlays that someone will ever make and they need the reassurance that the final finish is of the highest standard.

“Consumers who are buying a new home should check if their developer is a member of the Consumer Code for New Homes as this will provide much needed reassurance that developers and their sales agents adhere to a high standard of professionalism in relation to the construction and sales process.”

“More and more buyers of new build homes are being left with an unacceptable litany of ‘snags’ and defects. These can range from poorly secured fixtures and fittings to shoddy tiling to major roof leaks and faulty drainage.

“Our HomeOwners Alliance ‘snagging retention’ campaign will incentivise developers to deliver decent, correctly-finished homes before buyers move in as well as to come back swiftly and deal with any emerging snags or defects. Sadly, money talks – if we want better quality homes, we must let homeowners hold back cash.

“In the Government’s drive to build more homes quality has been compromised in the quest for quantity. Government must encourage developers to offer all buyers of new homes the right to retain a very minimum of 2.5% of their purchase price for six months to give time for snags and defects to be righted. If this is not done, then they must be compensated financially.”

“Persimmon have taken a step in the right direction but let’s hope it is not a PR exercise. They have only agreed to put right snags identified the day people move in – not emerging snags. Expecting new build homebuyers to inspect and produce a snagging list the day they move into their home is setting them up to fail. We would be happy to work with them and all other new build home developers to create a fairer snagging retention.”

Those that support the idea of a new build snagging retention feel there are current quality issues with new build properties and that the retention would incentivise builders to improve quality standards, fix things in a timely fashion when problems arise and give homebuyers and homeowners greater leverage to get problems sorted.

We are looking for reputable organisations, equipped with the right expertise and great customer service, to advertise here.

Please get in touch to find out more