– More people dream of becoming homeowners, with the proportion of non-homeowners who aspire to own their home rising to almost three quarters (73%), up from 65% four years ago

– House prices, the ability to get on the property ladder and saving for a deposit continue to top the nation’s list of housing concerns

The housing crisis is deepening as concerns mount about the availability and quality of homes, while increasing numbers aspire to own the roof over their head, according to the 2016 Homeowner Survey conducted by YouGov for HomeOwners Alliance and BLP Insurance. The survey, in its fourth year, polls over 2000 UK adults on the housing concerns and latest trends affecting homeowners and those aspiring to own.

The survey shows that the appetite amongst UK residents to own their home has been steadily rising over the past four years. Almost three quarters (73%) of non-homeowners now say they would like to own their home compared to 69% last year, 68% in 2014 and 65% in 2013.

While the desire to own is rising, the ability for first-time buyers to get on the housing ladder and saving for a deposit remain top concerns nationally (among UK adults, 82% and 80% respectively say these are serious problems).

The survey shows that the housing crisis is most acute in the capital.

However, there is a noticeable drop in concern about the rates of stamp duty, in the wake of the government’s reforms of the stamp duty system. Concern about negative equity has slumped among the UK overall to 44% from 64% two years ago, as house prices have continued to rise. The continued low interest rate environment has eased concerns about the ability to pay off the mortgage.

Paula Higgins, the Chief Executive of the HomeOwners Alliance, said:

“Despite a blizzard of government initiatives aimed at helping homeowners, the housing crisis is deepening across the country, with ever more non-homeowners wanting their own home, and ever greater concern about the lack of housing. Many government policies have boosted demand for homes, but what this survey shows is that the real problem is the desperate shortage of houses. Until the government tackles the fundamental issue that we just don’t have enough good quality homes, the housing crisis will continue to deepen and a generation will continue to have their dreams of homeownership crushed.”

Aspiration to Own Trend (Among Non-Homeowners): 2013-2016 Homeowner Survey 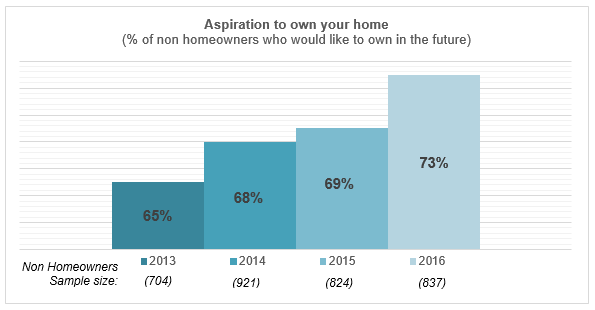 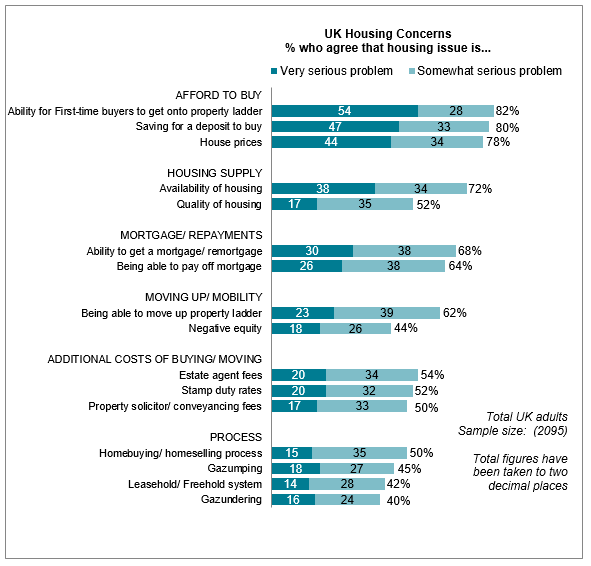 – One in two (52%) of UK adults overall say quality of housing is a serious problem up from 49% last year.

– Concern about house prices has nudged upwards over the past year (78% vs 76% of UK adults say it is a serious problem).

– People are less worried about the cost of moving than they were a few years ago. The proportion saying these are serious problems: stamp duty rates (52% vs 64%), property solicitor/ conveyancing fees (50% vs 61%) and estate agent fees (54% vs 64%) have all dropped since 2014. – London is a hotspot for housing concerns. The capital registers higher levels of concern than the UK overall for house prices, availability and quality of housing, ability to get a mortgage/ remortgage, stamp duty rates, gazumping and leasehold / freehold system. Levels of concern about house prices, availability and quality of homes rising over time.

– Concern about availability of housing is most pronounced in London and has risen in recent years.  88% say house prices are a serious problem, up from 87% last year and 84% in 2014.

– Quality of housing concerns are greater in the North East (62%), Northern Ireland (62%), London (60%) and the East Midlands (59%). Concern about the quality of homes has risen in each of these areas over the past year.

– North West and Scotland are more positive housing markets generally: The North West region registers lower levels of concern than the UK overall on house prices, availability and quality of housing, as well as, ability to save for a deposit, get a mortgage/ remortgage, repay a mortgage, move up the housing ladder, homebuying/ selling process and property solicitor/ conveyancing fees.  In Scotland, house prices, the quality of housing and saving for a deposit are less of a concern than in the UK overall. Issues related to the homebuying / selling process and stamp duty rates are also seen to be less serious problems.

– In the North East, affordability issues including saving for a deposit, ability to get a mortgage/ remortgage, being able to pay off mortgage and being able to move up the property ladder are of greater concern than the UK overall. 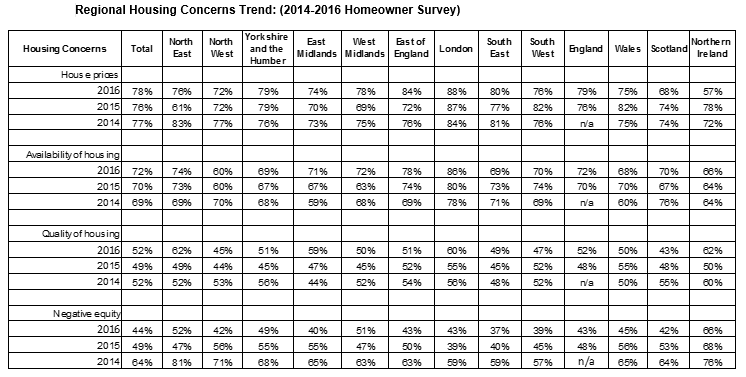