Changes in house purchase prices reported by the major indices over the past month range from a high of +0.6% to a low of-0.2% (up on average 0.2% in the past month).  Rightmove, tracking asking prices, reports a fall in asking prices in August of -1.2%. 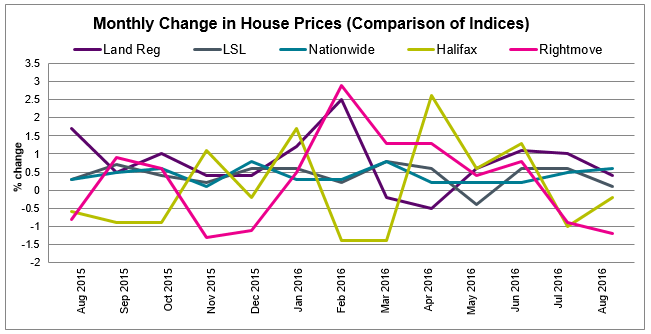 UK home sales in July are 8.3% lower than the same month last year (HMRC seasonally adjusted figures). Transactions are below 2015 levels in April, May, June and July following record transactions in March (ahead of stamp duty changes on second homes).

The decline in transactions is likely to continue with the number of mortgage approvals for house purchases down 5% between June and July to an eighteen-month low (Bank of England). Mortgage approvals are a leading indicator of completed house sales.

Buyer enquiries are down 5% between June and July (Rightmove).  This is matched by a fall in new instructions from sellers — down for the fifth month in a row. (RICS)

While the rate of house price growth is slowing, the lack of homes on the market is keeping upward pressure on house prices.

Economic reports indicate that the unemployment rate was at a ten-year low in June and retails sales were up 6% year on year in July.

However, consumer confidence is down in July.  Business surveys report a slowing in July among manufacturing, services and construction sectors.  The Bank of England is anticipating little economic growth over the remainder of the year.

In response the Bank of England’s Monetary Policy Committee has brought in measures to help support economic activity and the housing market – lower interest rates, the purchase of £60 billion of UK government bonds to put downward pressure on long term interest rates and the creation of the new Term Funding Scheme which gives lenders guaranteed access to low cost funding (to ensure lending is sustained).

Land Registry April data indicates house prices are up in most regions.  Prices down in Wales, the West Midlands and the South West. 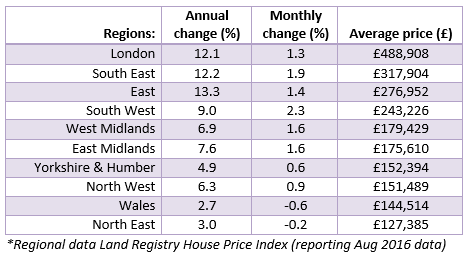