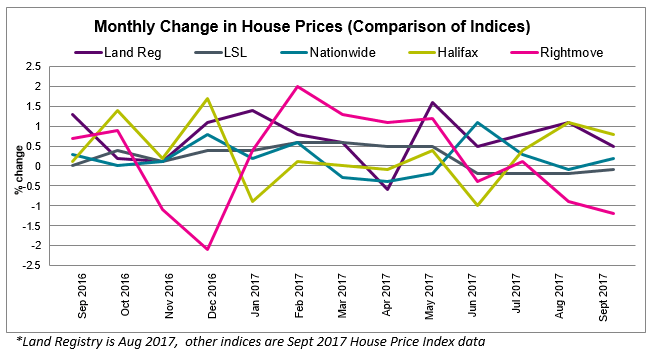 Commenting on the figures, Katherine Binns, HomeOwners Alliance Research Director: “The autumn bounce we have experienced in recent years has not materialised in 2017.  Activity is subdued, with buyer demand and sales down a fraction in the past month.  Prices continue to nudge upwards nationally, supported by a shortage of homes available for sale, but the rate of annual house price growth continues to slow.  With the Bank of England’s Monetary Policy committee indicating a rise in interest rates is likely in the coming months, we would expect the cool climate to continue.”

UK home sales fell slightly in August – down 0.5% between July and August 2017.  Transactions are actually 6.6% higher than August 2017. It is worth bearing in mind, however, that home sales from August 2016 may have been affected by a slowdown following a period of uncertainty after the result of the EU referendum.  (HMRC seasonally adjusted figures). Mortgage approvals for house purchases, which are a leading indicator of completed house sales, were also down between July and August  – down 2.7%.

Nationwide:  “At its September meeting, the Bank of England’s Monetary Policy Committee signalled that if the economy evolves broadly in line with its expectations an interest rate increase is likely in the months ahead.  This would be the first increase in the Bank Rate since July 2007.  We would expect a modest rise in the Bank Rate, by itself, to have only a modest impact on economic activity.”

Halifax:  “UK house prices continue to be supported by an ongoing shortage of properties for sale and solid growth in full-time employment.  However, increasing pressure on spending power and continuing affordability concerns may well dampen demand.  There has been recent speculation on the possibility of a rise in the Bank of England base rate.  We do not anticipate this will have a significant effect on transaction volumes.”

Rightmove:  “There were Autumn price bounces nationally in 2014, 2015 and 2016 but the south of the country has turned this month into a bit of a damp squib, whilst some northern regions are still showing marginal signs of upward price pressure. Estate agents are clearly advising many sellers that they have to lower their price expectations to fit in with buyers’ stretched financial resources, with that price compromise hopefully generating extra buyer interest.”

RICS: “Results are symptomatic of a market lacking momentum at the national level. Headline indicators on demand and sales slipped deeper into negative territory, with this subdued picture anticipated to persist over the coming months.  Feedback from contributors suggests the recent shift in interest rate expectations may be contributing to the more cautious tone in market sentiment.”

In the past month, house prices have fallen in London (-1.0%) and remained stable or increased in most other regions. 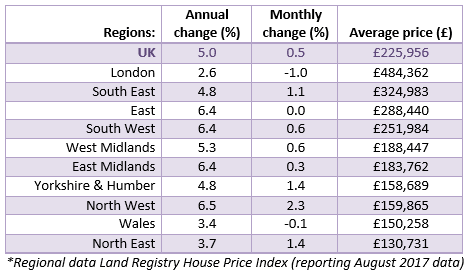