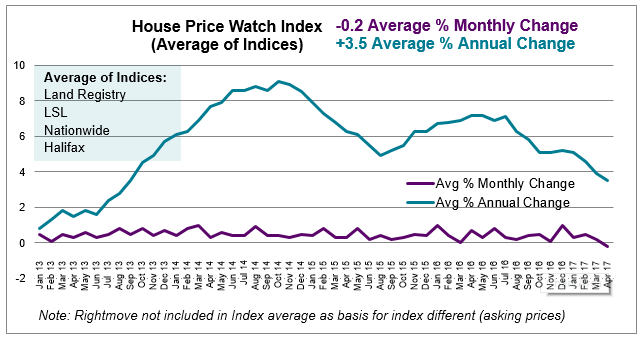 UK home sales decreased by 3.2% between March and April 2017; Transactions are up year on year but transactions in April 2016 were unusually low given the introduction of higher stamp duty rates on additional homes. (HMRC seasonally adjusted figures).

Commentary:  Squeezed affordability and climate of uncertainty are likely contributing to slow-down

HOA: “House prices have fallen for the first time in years alongside slower market activity.  There appear to be two factors at play contributing to the slow-down:  continued uncertainty caused by Brexit and the snap general election, as well as, squeezed household budgets, as wage growth slows and inflation rises.”

Nationwide:  “While monthly figures can be volatile, the recent softening in price growth may be a further indication that households are starting to react to the emerging squeeze on real incomes or to affordability pressures. The slowdown in house prices may be part of a broader trend. Retail sales growth has slowed markedly in recent months, from a 14-year high of 7.3% in October, to 3.7% in February and 1.7% in March.”

RICS: “Comments of some respondents, suggest that the calling of an early election may have created an added layer of uncertainty in the market although less marked than in the past. In addition, feedback references the ramifications of stamp duty changes particularly at higher price points.”

Halifax: “Demand appears to have been curbed due to deterioration in housing affordability caused by a sustained period of rapid house price growth during 2015-2016. Signs of a decline in the pace of job creation, and beginnings of a squeeze on households’ finances as a result of increasing inflation, may also be constraining the demand for homes.”