June 2017 House Price Watch indicates that house prices are up on average 0.2% in the past month and up 3.6% in the past year 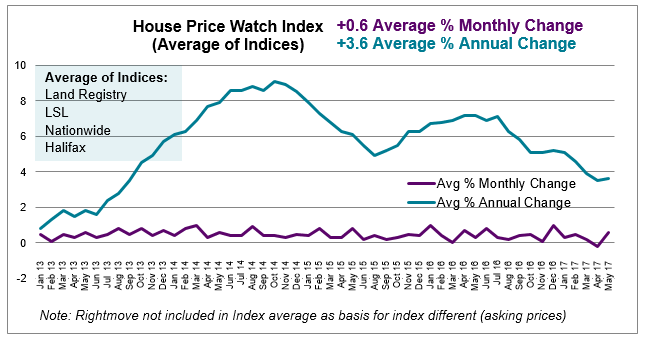 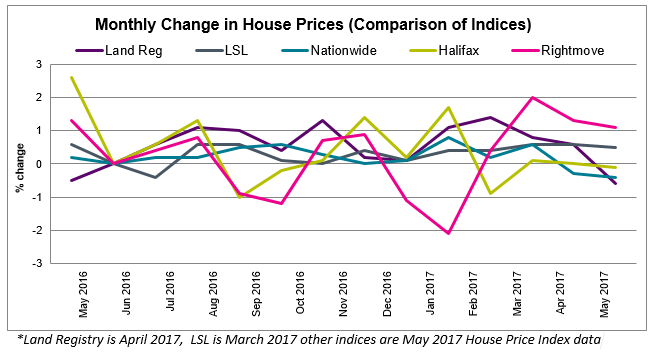 While house prices are up, UK home sales decreased by 3.2% between March and April 2017; Transactions are up year on year but transactions in April 2016 were unusually low given the introduction of higher stamp duty rates on additional homes. (HMRC seasonally adjusted figures).

The volume of mortgage approvals for house purchases – a leading indicator of completed house sales also fell by 2% between March and April, to 64,600. (Source: Bank of England, seasonally-adjusted figures)

The May 2017 RICS UK Residential Market Survey results indicate enquiries, instructions and sales have declined over the month.

HOA: “While house prices are up in the past month (with a shortage of homes available for sale), transactions have fallen likely caused by uncertainty surrounding Brexit negotiations. With more uncertainty ahead as a result of the snap election and uncertain result, we expect to see a continued slowing of activity.”

Nationwide:  “It is early days, but this provides further evidence the housing market is losing momentum. This may be indicative of a wider slowdown in the household sector, though data continues to send mixed signals in this regard. Given the ongoing uncertainties around the UK’s future trading arrangements and election, the economic outlook is unusually uncertain, and housing market trends will depend crucially on developments in the wider economy. ”

RICS: “Price growth (although still positive) appears to have lost momentum in the latest report and expectations suggest a further cooling is likely in the near term. The General Election is again commonly cited as a factor hindering activity, causing some hesitancy from both buyers and vendors.”

Rightmove: “We normally see a high proportion of market activity in the first half of the year, and in spite of potentially disruptive events the pattern is continuing. It remains to be seen how much momentum may drop away in second half of the year with stretched affordability, though competition among lenders keen to lend will help some to push their budgets higher.”

House prices are up in all regions of England and Wales in the past month.  The region experiencing the highest rate of annual house price growth is the East of England (up 8.1% in the past year). 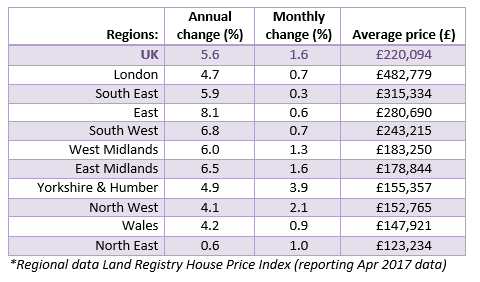