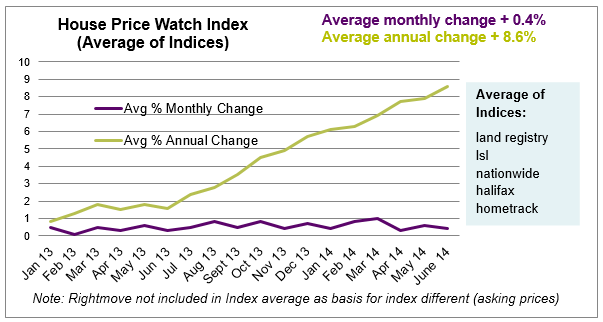 House prices are up but the market is cooling

The number of housing transactions is down. Up until May of this year, monthly transactions were up an average of 34% above the level recorded in the same month last year. Transactions dropped off in June. By comparison, they are estimated to be up 10% year on year and down 6% from May (according to LSL data).

Reports show buyer demand is also beginning to tail off. Hometrack’s monthly survey of estate agents and surveyors indicates there was no growth in new buyers registering with agents in June; a major change from the trend over the past 18 months.

Buyer confidence may be waning with talk of housing bubbles, potential interest rate rises and more stringent mortgage affordability checks. “Over the past year and a half, pent-up demand has fed back into the market after several years of low activity. The proportion of households willing to enter the market appears to have plateaued for now until the outlook becomes clearer.”  Hometrack

Seller numbers have risen over the past month and Rightmove notes a rush of new sellers in London (up 23% in the past month) “We’ve reached a point where the gap between London and the rest of the country is becoming irresistible to London home owners who have for several years put off moving out.” Savills

Mortgage Market Review measures, with greater emphasis on affordability alongside additional guidance on stress tests, may also be contributing to a slow down. 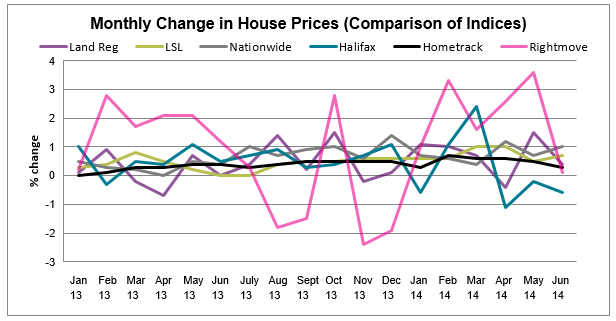 Regional Summary – House prices up in all regions in the past year.  London leads house price growth – up 18.5% in past year

In the past month, house prices are down slightly in the Northern regions and have continued to edge upwards in the South, East and Midlands.

How will the new mortgage lending rules effect me?

From 26 April 2014, new mortgage lending rules come into force under what is known as the Mortgage Market Review (MMR). We take a look at what this means and how will it affect your mortgage application...