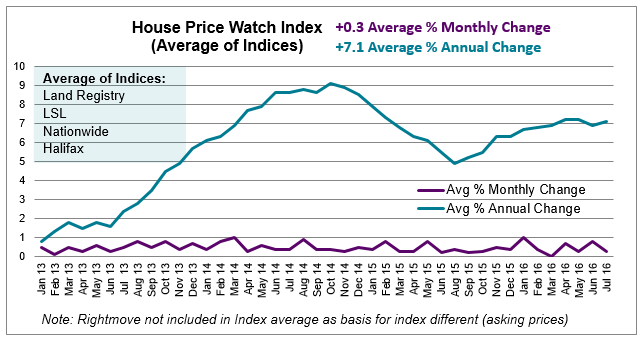 House price indices for June and July range from a low of -1% (Halifax) to a high of 1% (Land Registry).  On average across the major indices, house prices are up 0.3% in the past month and up 7.1% in the past year. In the immediate term, it will be difficult to determine whether any drop in transactions is as a result of a rebalancing of early year activity or the impact of the referendum result.

Hesitancy among buyer and sellers is expected in the short term until greater certainty around the economic impact of Brexit plays out. Buyer enquiries between June and July softened (down 5% report Rightmove). Time will tell whether the Bank of England cut in interest rates will help to boost confidence and a return in buyer numbers in the autumn. New instructions from sellers have fallen for the fourth month in a row (RICS).

With the stock of homes for sale very low, tight supply is likely to keep upward pressure on house prices.

House prices are up in most regions according to June Land Registry data.  Prices are down slightly in North East and West Midlands regions.

London has been tipped as the market most likely to be affected by Brexit. While it is too soon to tell the impact post Brexit, London house prices are growing at a slower rate than earlier in the year and are reported by Rightmove to be taking longer to sell. 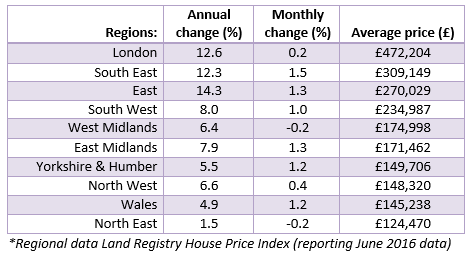