Pre-election housing news – and what it means for you

There's nothing like an election on the horizon to get ministers and opposition parties looking at ways to appeal to the masses. And what better topic than our most obsessed about possessions - our homes. We take a look at the proposals and see what they mean for you.... Ed Miliband’s mansion tax is an annual tax to be paid by the owners of houses worth more than £2m. Originally a Liberal Democrats proposal, it was launched as a pre-election promise by the Labour leader this month with the aim of raising £1.2bn to be spent on the NHS.

Details are still coming through but it is expected the tax will be banded so that the lowest band effects owners of homes worth £2-5m, with the biggest spenders with mansions over £100m paying the most.

Who will have to pay?

Zoopla’s analysis of all properties in Britain currently valued at more than £2m found that in excess of 108,000 households would be liable for the annual levy. Properties in London and the South East would account for the vast majority (95.9 per cent) of the additional £1.63bn cost with the rest of the country contributing just 4.1 per cent (£66m) of the total contribution.

But people on an average income are not being targeted. For those that live in London and have seen their house prices inflate while their income remains modest, Labour has said that the “asset rich, cash poor” may be allowed to defer payment of the tax until they sell their property and that they will raise the limit each year in line with house prices.

Our concern is that this is the thin end of the wedge. Paula Higgins, Chief Executive of the HomeOwners Alliance said:

“This would be the first annual tax from national government on property  owners. At the moment national government only imposes stamp duty (one off at time of sale) and local government has the annual council tax charge. So this will be the THIRD tax regime imposed on homeowners.  And what we know from stamp duty is that what is imposed at the top end if the market then moves down into the mass market. Next it will be imposed on all houses over £1m, then all houses over £750k etc.”

“They say they want to help people own their own homes, but they are introducing the first national homeowner tax which will start off affecting only a few but will inevitably end up hitting the many – just like stamp duty.”

The Prime Minister has pledged 100,000 new homes for young first-time buyers available at a 20 per cent less than market value to be built on brownfield land.

Houses built under the scheme would be exempt from some environmental requirements, subject to lower or perhaps zero Community Infrastructure Levy rates and would not be required to provide a proportion of affordable housing. These starter homes will be made available to “hard working people under 40” and can’t be bought by foreigners, buy-to-let landlords or flipped round in a quick sale. We’re certainly glad to hear that and anything to help first time buyers into the property ladder is welcome. Watch this space.

Rent to Buy is a £400 million programme to boost building of new rental homes aimed to help people later upgrade into home ownership. The aim is that it will allow people to rent affordably now, save for a deposit, and then either buy the new home (or a different home) later.

Data released by the HMRC this month shows that stamp duty revenues are up almost a third from £4.9billion in 2012-13. Homebuyers paid £6.4billion in the levy in the last tax year. 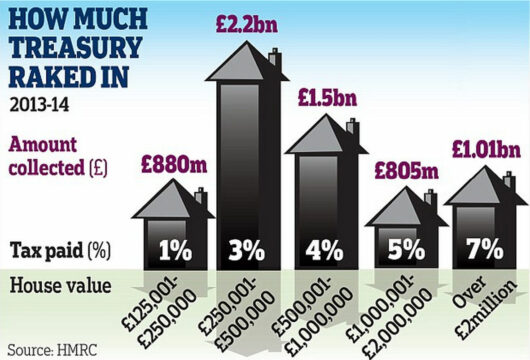 “These latest figures show just how wrong stamp duty is.  It was a tax introduced to apply to the few. It is now a tax on families and first time buyers buying homes to live in who have to save thousands to pay this upfront tax.

Eric Pickles announced yet another complicated loan scheme for homeowners this weekend promising to create “a springboard to homeownership”. But just as first time buyers take the leap, they stumble on the sky high hurdle that is stamp duty.

For some reason, the Government doesn’t see any contradiction in their attempts to get people onto the property ladder and heavily taxing them as they clamber onto the first rung. These figures show they must be blinded by the sheer amount of money they are raking in. George Osborne is addicted to stamp duty and can’t admit to the need for reform.

If the Government was serious about helping first time buyers, the stamp duty exemption threshold would always be above the average house price, so ordinary homebuyers don’t pay.”

So while there’s no sign of stamp duty reform yet, watch this space. We’ll continue campaigning.