A new survey reveals what parents spend most time and effort on when preparing the nursery, the most popular trends and how the spending doesn't stop there. A recent survey has revealed the time, effort and money parents put into decorating nurseries and children’s rooms, from agonising over furniture choices to buying things new or second hand.

Parents will spend more than £5,300 decorating their child’s nursery and bedrooms before they turn 10, according to a new poll.

The survey of 2,000 mothers and fathers by the retailer Next, found six in 10 made sure their new son or daughter’s room was ready for them before the birth, spending around £853 on new furniture, decor and soft furnishings.

The research suggests parents will redecorate their children’s rooms at least once every two years – parting with £900 each time – a further £4,500 will be spent before their 10th birthday.

But while 42 per cent admitted to spending too much money on their child’s nursery, 37 per cent did not mind how much it cost as long as their child was happy.

Although, having said that, more than half of fathers (54 per cent), polled thought they spent too much time and money on decorating the nursery – compared to just 35 per cent of mothers.

And 68 per cent of parents surveyed agreed that the design and decor of a nursery was important, spending an average of 20 hours to make sure everything is just so.

It also emerged more parents now choose neutrals or bright colours such as grey or yellow (57 per cent), while just 36 per cent opted for the ‘traditional’ pink for a girl and blue for a boy. 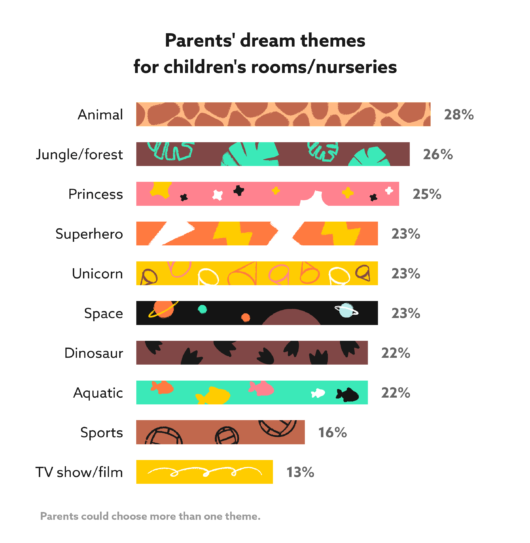 The poll also found the furniture was given the most thought, as 28 per cent said this took the longest to decide on when planning their baby’s nursery.

Older parents who are now aged over 55 were more likely to hit the shops, with 57 per cent buying everything new.

The cot is considered the most important item to get right in the nursery, while others wished they had spent more on a baby monitor (24 per cent), baby bouncer (26 per cent) or the wallpaper (20 per cent).

But 21 per thought they spent too much money on the cot mobile while almost a fifth think they paid too much for a changing table.

When it came to the inspiration for their baby’s nursery more than a quarter took ideas from friends’ or relatives’ homes.

How should I finance my home improvement project?

Loft conversion: where do I start?

Garage conversion: where do I start?

Bathroom refurbishment: where do I start?

Home Extensions: where do I start?

Do I need planning permission?

How to make your home more valuable and sell faster