Including how you can find your dream home on Instagram, news that house building outputs have flatlined, radical plans to end leasehold, 100 least affordable places to rent and more 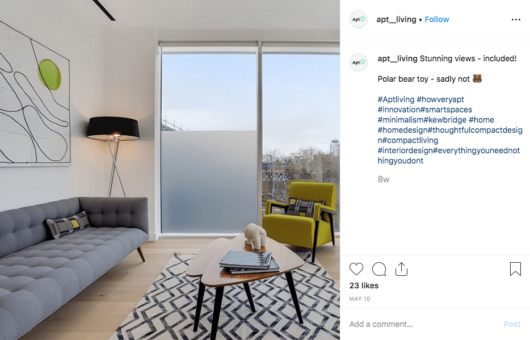 In the news this week, the Metro shares the story of Hadden White. AFTER a two-year search, Hadden can’t wait to quit his house share in Tooting and move into his own apartment at Apt Living’s Kew Bridge development. His criteria was very clear: he was looking for a high-quality home offering London Help to Buy and with room to hang his large collection of suits.

Hadden continued his search across London until he stumbled across Apt Living while scrolling through Instagram. The stylish compact apartments maximise the square footage by reducing wide hallways and any other area not used on a daily basis, and feature floor-to-ceiling windows.

His one-bed, second-floor flat cost £325,000 and he’s taken advantage of London Help to Buy, which reduces the costs of home ownership by providing a loan of up to 40 per cent of the purchase price.

Moving in to a new-build home should be an exciting time but homeowners across the country are being denied the chance to save hundreds on their energy bills because they are trapped in long-lasting contracts with a single supplier.

Also revealed in the news this week, This is Money highlights that in the new town of Cranbrook near Exeter in Devon, residents pay nearly twice as much as the cheapest available tariff, yet they will not be able to switch for 71 years.

This is because the housing development gets its heat and hot water from an unregulated ‘district heating scheme’ run by Big Six provider, E.on. Research published in the Mirror in the news this week that private renting is “unaffordable for low-wage families in two-thirds of the country.”

Housing charity Shelter analysed average private rents for two-bedroom homes in every local council area in England to assess whether they would be affordable to working families in lower paid jobs.

In some of the worst areas in the country average rents are 127% of the average salary.

The findings indicated that, excluding housing benefit, there are 218 council areas where local families earning a low wage would be forced to spend more than 30% of their salary on rent.

A recent HomeOwners Alliance survey also revealed that 6 in 10 renters fear they will NEVER afford to own a home. Labour announces radical plans to end leasehold ownership of houses and flats to save the average buyer £8,000 – Daily Mail

Labour this week pledged to crack down on toxic leaseholds and save homeowners thousands of pounds.

The party set out radical plans to end leasehold ownership of houses and flats – and make it far easier and cheaper for people to buy the freehold of their homes.

Ground rents would be scrapped for all new builds and would be set at a maximum of £250 a year for existing leaseholders.

And  the Daily Mail reports that Labour said their proposals could save a person buying the freehold on an average home almost £8,000.

If you have a lease on your property and want to extend it, why not use the HomeOwners Alliance Find a leasehold solicitor service to help or get free advice by reading our guide on living in a leasehold property. Construction leaders are calling on the new Prime Minister to stimulate construction and house building for the benefit of the wider economy as the latest statistics show that the sector is flatlining, says the Federation of Master Builders (FMB).

Commenting on the latest construction output statistics from the Office for National Statistics, which show that construction output growth in Great Britain was flat (0.0%) in the three-month on three-months to May 2019, Sarah McMonagle, Director of Communications at the FMB, said: “Alarm bells will be ringing in the ears of the two candidates vying to be Prime Minister, with these latest stats showing that the construction sector is at a standstill.”

Sarah continues “Whoever wins the race for PM, I want to see that person take decisive action in their first days in office by intervening to stimulate our waning sector, which is so vital to the health of the wider economy. Indeed, without it, our country’s house building aspirations will be impossible to deliver.”