Why are some sellers being hit with two bills for selling one house?

As consumers continue to get stung by estate agent claims for double commission, we look at recent coverage for our members, and changes in estate agent guidance that should see consumers put first 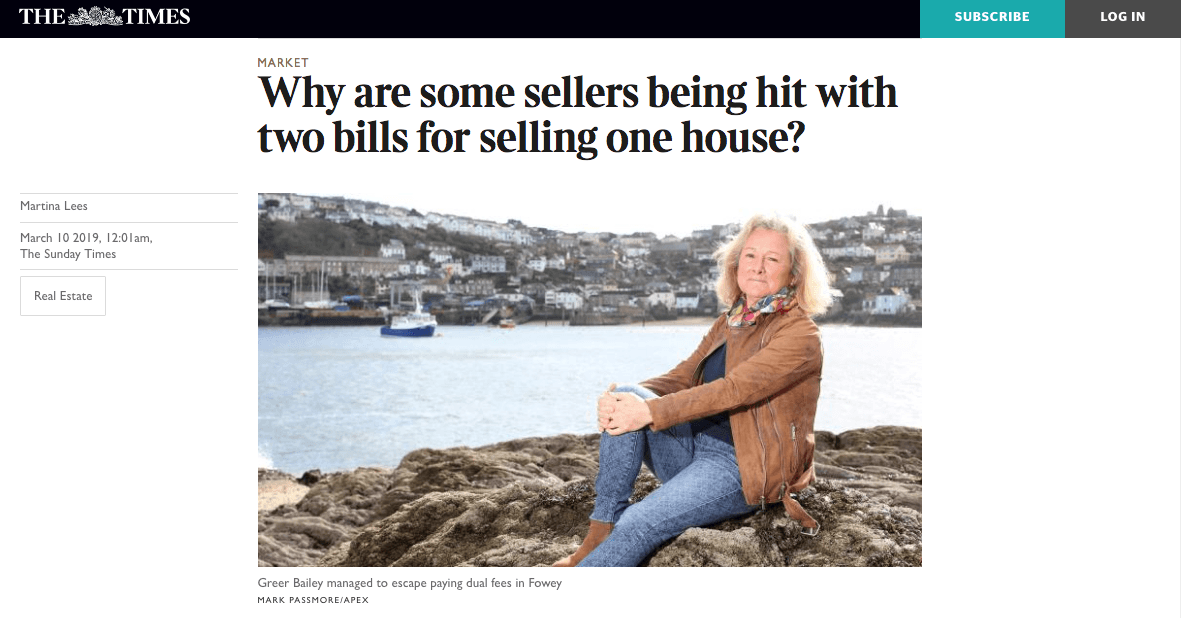 We’re proud to be able to share another great piece of coverage for HomeOwners Alliance members this week. In her Sunday Times article, journalist Martina Lees highlights the fact homeowners are unfairly being asked to pay two sets of estate agent fees, drawing on the experiences of our members Greer Bailey and Stephen Shaw. Here’s some of what that story covered….

Nine months after Stephen Shaw sold his parents’ house in Berkshire, he got a bill for £8,600 from the estate agency the family had previously sacked.

Shaw says the Slough branch of Chancellors was too busy to host a viewing, forcing him to drive three hours from Leicester, where he lives, to take buyers around the three-bedroom property in Datchet. The agency did not put up a board, so Shaw screwed one together, painted “For sale” on it and stuck it in the hedge. “I got five roadside callers in 40 minutes,” he says.

The family dismissed Chancellors and instructed another local agency, which sold the house within a week for £480,000, in September 2017. Yet Chancellors insisted that its contract entitled it to commission nonetheless.

Dual-fee disputes, in which sellers face paying commission to two agencies, have become the “biggest systemic issue” in sales, says Katrine Sporle, the property ombudsman. Complaints about this issue to the adjudication service more than doubled in a year to 72 in 2018; it has already received 25 in 2019. “One of the big agencies told me it had 400 cases on their books in which it believed it was due a fee that had been paid to a different agent.”

It is not just the volume of complaints that is growing: so are the sums involved. Agents are also more competitive and clued up. “Technology enables even small agents to set up alerts to check when sales go through,” says Michael Stoop, the ombudsman’s industry chairman.

In one current case, a family who sold their four-bedroom London home for about £1.5m received two claims for commission, totalling £36,000. And the time lapse can be lengthy: 18 months after exchanging on their London home, a couple in their eighties received a demand for £13,650 commission from an agent they had let go — on top of the £9,750 they’d paid a second agent for selling the £650,000 property. “They were incredibly worried,” says Sporle, who ruled that the first agent couldn’t claim commission. “It was having a detrimental effect on their health.”

The buying and selling of property is an unusual deal. “You don’t pay twice for a toaster, but you could easily get into a situation of paying twice to sell your home,” says Paula Higgins, chief executive of the HomeOwners Alliance (HOA). “It can add up to thousands of pounds, and sellers don’t find out until after they’ve moved or when they’re coming up to exchange.”

A month after Greer Bailey, 59, agreed to sell her grade II listed cottage in Fowey, Cornwall, for £515,000 through Country & Waterside Prestige (CWP), it emerged that the buyers were the same couple who had withdrawn an earlier offer when Bailey had instructed May Whetter & Grose (MWG) for seven months in 2017. “On the one hand, I was trying to get assurance from both agents that I wouldn’t have to pay two sets of fees, before exchange of contracts,” Bailey says. On the other, she had to ensure that MWG — through which she was also buying her next home — would not scupper her purchase. “It was so worrying. I had to fight tooth and nail.”

It took five months to agree that both agents would split the £7,725 commission. MWG says it offered to halve its fee “at an early stage”; CWP says it “followed clear procedures”.

You can read the rest of the article here

We are pleased to see that the Property Ombudsman has issued further guidance this week to try to avoid these double commission cases happening. This guidance sees a step change in saying quite clearly that it is the estate agent’s responsibility NOT to put a consumer at risk of paying two fees. And for an agent to earn their commission fee they need to have carried out a viewing less than six months before the sale with the eventual buyer.

We’re also pleased to see TPO formalising our advice in their guidance – saying the first agent must give the second agent a list of viewers to pass to the second. We’d advise home sellers get a copy of that lost as well.

And the most important thing you can do to avoid dual commission? Yes that’s right, check the small print of your contract before you sign. We can do this for you. For £45 annual membership, we can look over your estate agents contract before you sign and be on hand every step of the way in selling and buying your home, with dedicated advice and all the services you’ll need.