How will the new Mayor of London tackle the housing crisis?

House prices in the Capital have climbed by 13.9% in the past 12 months and the average house price is well over £500,000, pushing homeownership out of the reach of many. With a new London Mayor in place we take a look at how he plans to address the crisis faced by first time buyers, as well as wider issues affecting homeowners 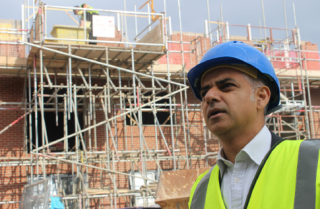 Sadiq Khan has stated that as Mayor of London his single biggest priority will be to build thousands more homes every year and he has publicly committed to a target of 80,000 new homes a year. There is general consensus that building more homes will help create a more sustainable housing market and it’s certainly top of our wish list here at the HomeOwners Alliance. But while we’re enthusiastic about getting Britain building, we’re suspicious of ambitious targets made during political campaigns. If you look at past form in London, in 2014/15, only 26,860 homes were built in the Capital. We’ve got our fingers crossed that the new Mayor can deliver 80,000 new homes but he’ll need to use all.

The Mayor will use City Hall powers to coerce developers into building more socially inclusive homes. He will set up a new team dedicated to fast-tracking the building of genuinely affordable homes to rent and buy.

Under Sadiq Khan, any new housing development needs to contain 50% affordable housing. He explained in an interview with The Guardian that affordable means “…a combination of either social rents – and social rents are linked to manual workers’ salaries – or homes where you pay a London living rent (a third of average local earnings) rather than market value of properties.” The affordability test would be determined borough by borough: the London living rent would be higher in Hackney than Barking, for example, if the average salary was higher.

The new mayor has also promised to give first dibs to Londoners on new homes. This is something we fully support. Our HomeOwners Survey 2015, carried out by YouGov, found that a requirement for developers to market homes in the UK before marketing them overseas was an overwhelmingly popular policy, with 80% of adults supporting it. Hopefully Sadiq Khan’s policy can help redress the balance in favour of Londoners.

The Mayor’s plan to build new, affordable homes on land owned by the Mayor, including Transport for London land, as well as developing other public sector land, such as London’s NHS sites aimed at health service workers, is eminently sensible and should help in delivering the ambitious 80,000 new home target.

The Mayor has also promised to improve planning and design policies, to ensure more choice for down-sizers, the elderly or those in need of care. 10% of all new homes are to be wheelchair accessible

Khan has said he wants to support existing leasehold homeowners by working with London boroughs to ensure they have access to advice about service charges and extending their lease. We find so many homeowners coming to us surprised by the amount their charges have increased and saying they feel fleeced by their freeholder and maintenance company. We are constantly collecting evidence of this. Do get in touch at hello@hoa.org.uk if you have an issue or see our advice guide dealing with service charges and maintenance companies.

As part of Sadiq Khan’s manifesto, he’s promised that estate regeneration will only take place where there is full resident support. He has also said that demolition will only be permitted where it does not result in a loss of social housing.

It will be interesting to see how this plays out. We know from our members involved in regeneration schemes across the Capital that the consultation process for many of these schemes can leave residents feeling disenfranchised and often under attack – especially when developers slap on a Compulsory Purchase Order. Sadiq Khan will need to get to developers and their partnering local authorities to work harder to get residents on side – and much earlier in the process.

If you’d like to read more about our members’ experiences of estate regeneration, start with our interview with member Jasmin Parsons who lives on the West Hendon estate.

One of the main issues for aspiring homeowners in London is the rising cost of renting, particularly in the private sector. This inevitably leads to first time buyers struggling to save for a deposit or find an affordable home.

To tackle this issue, the Mayor of London plans to introduce a not-for-profit lettings agency to monitor landlords and end ‘rip-off’ fees for renters.

The new Homes for London Living Rent will be a new type of home for struggling renters, where rents are calculated based on one-third of the average wage in each borough.

There are also plans for homes to ‘part-buy, part-rent’ for first time buyers. We will watch with interest as these schemes unfold, and offer advice, as we do with existing shared ownership schemes.

The new Mayor of London has made it very clear that he will not build on the greenbelt. Instead, he plans to develop on brownfield sites and build up areas around town centres across the city.

According to the charity Empty Homes, there are almost 57,000 empty properties in London. Sadiq Khan plans to bring these empty homes back into use, using compulsory purchase orders if necessary and developing planning rules.

The new Mayor has promised to invest in older homes to make them more energy efficient as part of the campaign to switch London over to clean energy.

The new Mayor of London plans to tackle London’s homelessness problem with new initiative ‘No Nights Sleeping Rough’. There will be a focus on helping young people facing homelessness and improving councils’ efforts to find stable, private rented housing for those who are not able to move into social housing.

Paula Higgins, Chief Executive of the HomeOwners Alliance said on Sadiq Khan’s election victory as Mayor of London, “Sadiq Khan’s plans to build 80,000 new homes are ambitious, especially when you look at the number of homes being built every year to date in the Capital. It’s critical that he hits the ground running and puts all his City Hall powers behind delivering on this promise.”

“We also welcome plans to address wider challenges faced by homeowners, particularly leaseholders facing excessive service and maintenance charges, first time buyers who are struggling to save for deposits and homeowners that find themselves victims of bullying tactics as part of London’s regeneration schemes.”