Twice as many support stamp duty surcharge than oppose

Twice as many support stamp duty surcharge as oppose, despite loud opposition from landlord groups, our 2016 HomeOwners Survey reveals.

On the 1st of April, the government introduced a new 3% stamp duty surcharge to be paid by those buying buy-to let properties and second homes, and was met by loud opposition from landlord groups.

When asked whether they support or oppose the policy, more than twice as many people support stamp duty surcharge on second homes as oppose it, according to the 2016 Homeowner Survey conducted by YouGov for HomeOwners Alliance and BLP Insurance. 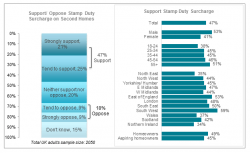 Those who support stamp duty surcharge on second homes believe the measures are a good way to level the playing field between those buying a home to live in and those making an investment purchase.

Some feel there has been a shortage of homes available for first-time buyers and this will make it harder for buy-to-let investors competing to purchase similar properties.

There are some anti buy-to-let feelings – a sense that buy-to-let may have been inflating house prices and pricing out local residents in some areas.

Those who oppose the stamp duty surcharge on second homes suggest the policy could have unintended consequences such as the surcharge being passed on to tenants in the form of higher rent.

Comments also indicate that they feel the government is making another tax grab or that the policy is anti-enterprise.

Stamp duty reforms introduced at the end of 2014 which replaced the slab structure of tax with a progressive stamp duty tax were also well-received with one third (33%) saying the reforms make buying their first home or moving up the ladder more affordable according to the 2015 Homeowner Survey.

“The British public believe that homes are for living in and not speculating with. The stamp duty surcharge might be bad for landlords but it will allow more young people to realise their dream of owning the roof over their head. This is why we initially called for the tax system to differentiate between aspiring homeowners and property investors. However, we must see the money raised ploughed back into building more affordable housing.”