Our very own green guru, Dr Paula Owen, recently met Mr and Mrs Skinner who were told to pull down £20,000 solar development despite being encouraged by local council to go ahead

I recently made the acquaintance of a gentleman by the name of James Skinner. James told me about his current situation with his local council, which was objecting to his installation of solar panels on the grounds that they may harm the current generation, and indeed, all those generations yet to come!  Intrigued and bemused, and thinking he must be slightly mad, I probed further into what possible objections a local council could have to perfectly innocuous, pollution free, green energy producing solar panels?

So, the story goes like this. James lives in Chiswick.  He, indeed, lives in a very lovely part of Chiswick that is, most fittingly, designated a ‘conservation area’.  James himself however, does not live in a listed building, in fact the side wall of his home, he will openly admit, is utterly unremarkable, as it has been built up over the last 40 years in very ordinary brick work – it is, truly, a side wall of no conservation merit.  Additionally, the side of his home in question faces the equally uninteresting, industrial façade of an old brewery.  No windows face onto James’ side wall, there are no features of historically merit on the brewery facade. The side road onto which the solar panels face is used as a drop off point for numerous lorries and beer barrels and is seemingly unloved by the council, given the state of (dis)repair of the tarmacked road, and utilitarian street lighting, compared to the love and attention given to the streets in the conservation area surrounding it. 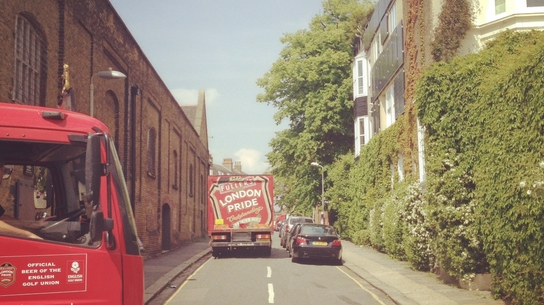 Two years ago James decided to install solar PV panels, as part of his general concern about environmental sustainability and the need for alternative source of clean, green energy. And therein lies his first mistake, instead of applying for planning permission (not usually needed for solar panels, but James  lives in a conservation area remember), he sought verbal confirmation from various people in the council planning departments that it would be ok to go ahead. The reason for this was they already had scaffolding up to replace windows so it was a very convenient time to put solar panels up too, and, as it was an afterthought, there was not the time to go through the long-winded planning permission process which can take months. The verbal assurances that all would be fine gave them the confidence to go ahead and install panels both upon their (flat) roof and the side wall of their building.

That’s when the trouble really started! The council, getting wind of the panels installation, made plain their disgruntlement at such an affront to humanity!  Did James not realise this was a conservation area?  Did he not comprehend the damage this could do to the ‘enjoyment’ of this and future generation’s ‘quality of life’?  Obviously not! And accordingly the council gave it to them with both barrels.

Two years later, and the fight continues.The Skinners have lodged appeals against the council’s rulings, but so far have come up empty. The council maintain that:

“The development [the PV panels] through its inappropriate size and positioning does not preserve or enhance the character and appearance of the Old Chiswick Conservation Area, creating a jarring and incongruous feature in the streetscene. It has not been satisfactorily demonstrated that the solar panel will produce more energy than other renewable energy sources, or that it cannot be situated elsewhere in the site.”

I highlight the part about not demonstrating that solar panels will produce more energy than other renewable sources, because of the obvious question it poses regarding what other sources are they considering?  Again, and I whisper it, are they really thinking of urban micro wind turbines?? Really? Would they be allowed in a conservation area? Or maybe they are thinking of ground source heat pumps as an option – mmm hardly viable in such densely built surroundings!  Maybe it’s air source heat pumps they are considering? Truly a carbuncle on the side of a building!! Or maybe they are thinking of some sort of micro hydro, given James’ proximity to the Thames??? – their preferred options of alternative, potentially more efficient renewable energy source solutions are just not clear from this planning objection of 2012.

James’ fight continued after the first round of objections. Indeed, recently he conducted his own poll of neighbours, passers-by, and anyone else he could find, to ask them their opinion of these ‘monstrous’ panels on the side of his home.  The poll concluded that 166 were in favour of keeping the panels, and only 2 respondents came down on the side of the council.  Buoyed by these findings, James presented them, and other arguments, to the council, but to no avail, his arguments have fallen on deaf ears, and in June 2014 the council came to the following conclusions:

“18. The harm to the character and appearance of the Old Chiswick Conservation Area is considerable and cannot be made acceptable. Despite the contribution to the imperative of reducing carbon emissions, the benefits of the development do not outweigh the harm.

19. It is noted that there is considerable local support for the appellant. However that does not negate the harm to the conservation area which, in accordance with paragraph 17 of the Framework, should be conserved so that it can be enjoyed for its contribution to the quality of life of this and future generations.”

Again, the highlighted segments are my own. What the council are saying, in my opinion, is that although the solar panels contribute to the overall UK goal of reducing our dependence on imported fossil fuels, although they reduce (in their own small way) the carbon emissions of the UK in line with our legally binding goals for 2020 and 2050, although their contribute clean, green, secure, pollution-free energy to the UK electricity grid, all of this does not outweigh the harm they do to the ‘quality of life’ and ‘enjoyment’ of this present, and future, generations who pass through this unremarkable Chiswick side street and are grievously affronted by the sight of PV solar panels.

I’m guessing anyone who has read this far would be slightly curiously to see the offending panels and how cruelly and despicably they will destroy the well-being and the quality of life of present, and future, generations of sensitive Chiswick residents.  Well, readers, you will not be disappointed, as I visited James to have my own life forever scarred by  these ‘blights on the landscape’. I must forewarn you however, before you view, I will not take responsibility for the future harm and distress the sight of these appalling pictures may cause.  You view at your own risk – you have been warned!

If you, like I, am dumbfounded by the council’s approach, please sign the following petition, we are trying to reach 1000 signatures, to try to get the council to see sense: Save the Skinners’ Solar petition